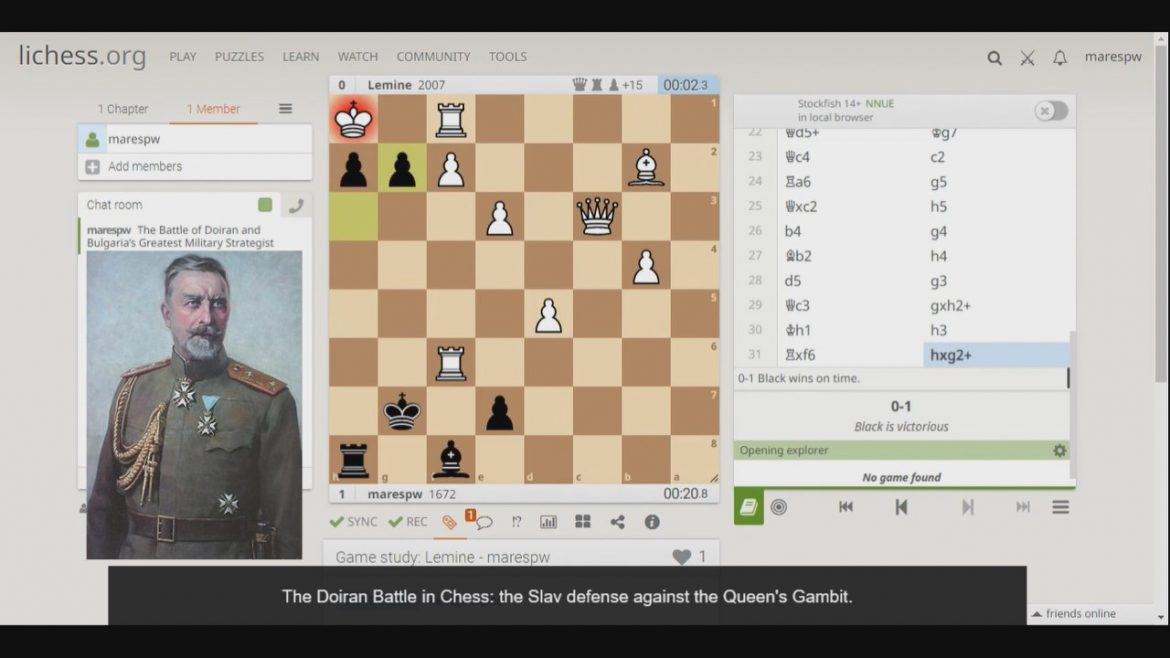 The Battle of Doiran in Chess

Do you enjoy chess, games, and military strategy? Have you ever wondered why we talk about the Slav defense and attribute it to “players who played it and turned out to be from Slavic countries”? Well, this is because some have an interest in Bulgaria remaining “small.”

With the video below, I pay tribute to the Battle of Doiran and to Bulgaria’s best military strategist, General Vladimir Vazov, and I prove to you that EVERYTHING can be transposed on the chessboard. The Queen’s Gambit Declined (QGD), or the Slav defense, is played much better under “normal” circumstances, but here I wanted to open up to the narrative line and you will understand the reasons for this if you also read the text below.

DISCLAIMER: The text is a compilation from the two sources mentioned above. My original work is only the chess game.

2nd DISCLAIMER: I do not feel proud of political and other confrontations and mistakes. You should not feel that way too. Peace ☮!

A young state that recently gained its independence, Bulgaria was exhausted from two Balkan wars and was plonged in a deep economic crisis due to the loss of wheat-producing Dobrudzha. In the meantime, in 1914 a huge conflict was ripening in Europe, split into two international alliances that were simply waiting for the moment to come to begin military action. The Entente, formed by Britain, France, Russia, and Serbia faced the Central Powers, formed by Germany, Austria-Hungary, and the Ottoman Empire. The member states of these alliances were bound by treaties of mutual aid and the smallest instability in Europe could ignite the long-built tension. Bulgaria had no interest in more wars.

On June 28, 1914, Austro-Hungarian Archduke Franz Ferdinand was assassinated in Sarajevo by Serbian nationalist Gavrilo Princip. This was the spark that ignited the First World War. Bulgaria suddenly found itself in a state of strategic significance. Its joining the Entente would pose a huge obstacle to the Central Powers having a continuous front since it would protect Serbia from Turkey. At the same time, the weaker Central Powers alliance desperately needed an ally to support the Ottoman Empire in the Balkans. The government of Dr. K. Radoslavov declared neutrality and for all of 1914, Bulgaria refused to take sides in the war. Unbound by alliances, it could clearly state the price of its involvement: Macedonia.

The Entente could not promise Macedonia to Bulgaria since that would run counter to allied Serbia’s interests. It offered Bulgaria support and cooperation if it remained neutral. In contrast, the Central Powers had no trouble promising Bulgaria the lands that it would have to fight for anyway. So, on October 14, 1915, Bulgaria joined the war on the side of two crumbling empires and a nation without colonial resources against a colonial empire and the most powerful Slavic state in the world. Broadly speaking, despite its resounding military successes, among which the reclamation of Dobrudzha and the occupation of Bucharest, Bulgaria’s defeat and that of its allies was certain.

Having already shown his strategic brilliance in the Balkan Wars, Vladimir Vazov, brother of the famous Bulgarian poet and writer Ivan Vazov, entered the First World War as a commander of the 5th Division’s artillery brigade. In October of the same year, the division was subordinated to the Bulgarian 2nd Army which was conducting operations against the Serbians in Vardar Macedonia. In 1916, he was made commander of the 1st Infantry Brigade of the 5th Division and successfully led it in action against Allies during their Autumn Offensive on the Macedonian front. On 1 March 1917, he took command of the 9th Pleven Infantry Division which was part of the First Bulgarian Army.

Beginning in 1916, the division occupied a stretch of the Macedonian front between the river Vardar and Lake Dojran. As soon as Gen. Vazov was appointed, he inspected the entire section of the front that was under his command and took measures to strengthen and fortify it. In fact, the measures undertaken on his orders to create a unified, coordinated defense ensured that the Doiran position would withstand two massive campaigns of British and Greek troops.

By its allies’ orders, Bulgaria’s advance along the Macedonian front stopped and the Bulgarian army dug in. In the spring of 1917 colonel, Vladimir Vazov assumed command of the Doiran position and began a well-thought-out series of fortifying projects. The terrain was mountainous and he brilliantly used that fact to his advantage. In his journal he wrote:

“In any military engagement, and especially in a defensive positional war, preparation is the most important factor for success… It must encompass everything: strengthening the position and its optimal occupation, keen observation of the field of battle and communication between the different regiments (infantry, artillery, etc.), preparing the infantry for rapid counterattacks, preparing the artillery to support the infantry in any scenario, maintaining the troops’ morale and instilling faith in the strength of the position and in our certain victory…”

The location of the Doiran Sector was crucial as it represented the shortest possible route to the valley of the Vardar and during the summer of 1918, its defense was expanded to consist of 4 lines arrayed in depth. Hence it was much better prepared to face an attack than the previous year. Under his guidance, the forces were deployed in order to create a defense in depth. His efforts to improve the positions were soon tested during the first campaign of the spring of 1917. Hoping that a breach in the Macedonian front would necessitate the diversion of German forces from the Western Front, the British Worcester regiment tried four times to force the Doiran position, but grossly underestimated its strength and was repelled.

From the annals of 11th Worcester battalion:

“[The British attack] had barely begun when three floodlights blazed from the hills opposite and scanned the slopes of the valley with their cold rays. Then the enemy barrage began in full force. The strength of Bulgaria’s artillery had not been suspected, their cannons were easily hidden among the mountainous terrain and the anti-battery work of our artillery had proven inefficient. A tornado of shells rained upon the stumbling soldiers. The enemy fire was so relentless that the supporting companies of Royal Berkshire were separated from those ahead and never caught up to them.”

The Second Battle of Doiran took place between 22 and 26 April 1917. Some 86 heavy and 74 field British guns bombarded the Allod Vardar Offensive line with more than 300,000 ordinary and gas shells by the British and two Grek divisions but caused insignificant damage. The following infantry attack enjoyed an augmented advantage in firepower and manpower and despite the damage they did to the Bulgarian fortifications, they suffered a heavy defeat. According to official British sources, the Allied losses totaled just over 7,000. Bulgarian sources however report a figure of over 11,000. In early May, the British resumed their assault but were again defeated and suffered heavy casualties. Following this attack, the Bulgarian 34th Troyan Regiment alone buried the bodies of some 2,290 Allied officers and soldiers. The numerical advantage during the entire battle of Doiran de la Entente was at least 15: 1.

On September 16, 1918, 75 000 troops under Gen. George Milne advanced against the Doiran position. After a long engagement, the position was breached and several outposts were taken. General Vazov responded immediately, sending reserve troops into the fray to regain communication with his outposts. In his journal he noted:

“After continuous and bloody skirmishes with bombs and bayonets, the defenders are beginning to recapture the lost positions. Parts of the main position are changing hands multiple times. The better news is starting to come in. The strong, brave, and determined opponent is exhausted. He is discouraged by the steadfastness and valor of the defenders.”

On September 19 the decisive, final battle for the Doiran position was held. Reinforced with reserve troops, the British spent five hours defending the newly conquered outposts, but with epic efforts, the Bulgarians prevailed and finally pushed them back. The tally of casualties is grim on both sides – the Entente loses 47,000 English, 20,000 Greeks, and unknown but significant French forces and leaves the battlefield with 11,670 wounded. Bulgarians lose less than 2736 fighters. Major Vazov was promoted to Major General.

A British officer wrote about this battle:

“When they mobilized us and sent us to the Balkans, we all left happy that we would complete a pleasant military excursion and will return covered in glory. We thought we would gain an easy victory over the Bulgarians, but we were sorely mistaken. At Doiran we encountered an opponent who fought with exceptional heroism and devotion.”

Exactly this devotion of the Ninth Pleven Infantry Division, combined with the military genius of Gen. Vazov prevented the annexation of Bulgaria by British forces. Unfortunately, a stalemate settled over the Macedonian front, lasting until the fall of 1918 as the Central Powers didn’t manage to take advantage of Bulgaria’s strategy and lost the center. Despite the decisive victory at Doiran, World War I concluded for Bulgaria with the armistice at Thessaloniki on September 29, 1918. The Treaty of Neuilly-sur-Seine was signed on November 27, leading to the second National Catastrophe and shattering the hopes of national unification.

On 24 February 1920 lieutenant-general Vazov went into the reserve. In 1926 he became mayor of Sofia. During his mandate (until 1932) the fire department was reformed, the electrical network expanded, and the public transport improved. Sofia became one of the “greenest” capitals in Europe. The last years of his life were spent in the village of Ribaritsa (near Lovech), where he died in 1945.

Any military victory is bittersweet. The reckoning in numbers cannot express the horrors experienced by the combatants on both sides. The Great War cost the world over 19 million lives. Among the most notable moments of Vladimir Vazov’s life was his invitation to visit England in 1936 as a guest of the British Legion. The British legion celebrated the British victory in World War I. The British veterans invited one of their worthiest opponents on the battlefield. At Victoria Station, Gen. Vazov was personally greeted by Lord Milne, who shook his hand with the words “It is a pleasure to meet the Bulgarian delegation, as even though we were enemies, you – like us – fought not only like brave men but also like gentlemen.” The British paid great honor to General Vazov as they lowered their national flags in his name. The chairman of the British legion Major Goldy said in his speech: “He is one of the few foreign officers whose name features in our history.”

The defensive strategy of Bulgaria’s best military strategist, General Vladimir Vazov, entered the strategy textbooks of the UK and, later, in other countries’ as well. It is widely recognized that were it not for the entry of the United States into World War I, the Entente had no chance of winning the war, especially if Bulgaria were put at the forefront of field operations.